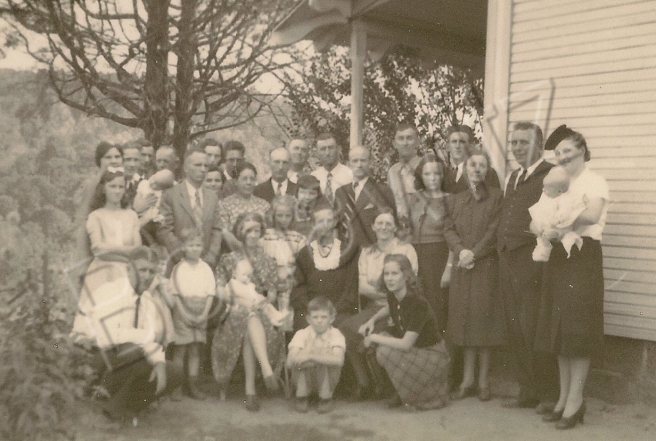 This year we are starting a challenge for ourselves and our followers. Ok, mostly for me so I can make some headway on my research in a timely fashion. The challenge is to answer a question a week or a month (depending on how much research it will take). My first question of the year is: Is there a document out there for my great grandfather’s death? The photo above is the family at his funeral.

First, let’s pull out the handy dandy research log so I do not duplicate any research I have already done. Ancestors name at the top, Millard Stephens or Stevens, objective – locate a death certificate, and location – West Virginia. The first thing I will put is what I know from family and that is that he died late 1930’s early 40’s. The next thing I do is look for an obituary that would give me a date. Huzzah! I found one, in my own files from years ago and Boo! I did not mark down what website I found it. This, of course, was back before I learned how to research correctly (do as I say not as I did).  However, I had marked down what newspaper it was from, the Charleston Daily Mail, September 29, 1939. 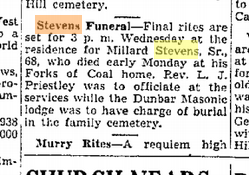 I pulled up a 1939 calendar and found that September 29 was a Friday and it says he died on Monday so that would make his death on September 25. There are also two clues here, one is the Dunbar Masonic Lodge having charge of the burial in the family plot which I am guessing is out in the sticks somewhere from what my family tells me and the Rev. L. J. Priestly officiating. Before running down those two clues I pop over to the most wonderful WV research site WVculture.org where you can find birth, marriage, and death certificates and records. However, nothing shows up for Millard and I tried all different spellings, locations, and more to no avail. The date is recent enough that there should have been a record, right?

Moving on, I called the Dunbar Masonic Lodge and they were very helpful in sending me a file, and by file, I mean a one-page record that had Millard listed as a member but no record of them assisting in any way with a funeral. Next up, call the Kanawha County clerks office. They also did not have anything but sent me back to the state archives and they sent me back to the WV Culture site where I could request a search in the archives on the chance that maybe his record was not transcribed onto the site. I wrote the letter, included the obit, as I do not need them to send that to me, and am waiting for a response with fingers crossed.

Next, I researched the good Rev. L. J. Priestly. By putting his name on Google, it sent me to several WV Baptist sites. Baptist, who knew? After scrolling through several Google entries I found one that mentions the good Rev. and Forks of Coal Baptist Church, ah ha! Remember the Forks of Coal location in the obit? Click on the link, call the number, no answer and no message. But there is a Facebook page that seems to be updated frequently so I put in a message to them there and wait patiently for a response.

In the meantime, I plug in Rev. Priestly’s name in the search box in Ancestry.com and the first thing that pops up is a city directory with Charleston, Dunbar, South Charleston, WV listed. Did ya see the Dunbar name? As in the Dunbar Masonic Lodge? Just helps to solidify that this is the right track. At this point, I went over all the places I could look and checked them off the list. You know the usual suspects, Ancestry, Family Search, Find My Past, Find a Grave. Nothing came up on any of them. Best hope at this point is a church record or the miracle of an actual death certificate from the state archives. Come on J. L. Priestly!

While waiting for a response from the church and the archives I called the Kanawha County Public Library and spoke to an awesome reference librarian who searched for an additional obituary for me. Sadly there was nothing. Just a few notes posted by the Masonic Lodge about the time and location of the funeral and one note in a social section about his son Herman and his wife returning from the funeral. The librarian did spend some time checking out the Rev. Priestly but not finding anything new or that I could use and directed me to a few other places to look such as the genweb site (which leads to Rootsweb which is currently down) and the Charleston WV Family History Center. The library had a handy-dandy donation tab so I could make a donation. Oh and nothing in the local histories at the History Center in case you were curious.

That is all I can do at this point until I hear back from the church and the state archives. I think my question for next week will be “Where did Millard live from birth to death?”. This will involve some Google Earth mapping (if I can remember how to do it). What is your question and did you get an answer? Curious minds want to know!

4 thoughts on “Ask and you shall recieve…maybe”

Thank you for listening! We appreciate your support of our podcast adventure and hope that you will continue to support us by checking out our site on Amazon when purchasing your genealogy books for research and pleasure.